The new book by C.S. Farrelly

The Shepherd's Calculus is a fast-paced political thriller that examines what happens when those cornerstones of American identity--capitalism and religion -- clash with its principals of justice.

When journalist Peter Merrick is asked to eulogize his mentor, Father James Ingram, he wonders how he’ll do him justice. Then he finds the box full of letters – Ingram's hand-written apologies to victims of sexual abuse, many returned unopened – and must confront the possibility that his idol was the perpetrator of the crimes.

U.S. President Arthur Wyncott has problems of his own. The next presidential election is swiftly approaching and he’s losing ground to his opponent, a Catholic convert whose relief work in Central America gives him an edge with Hispanic voters. With 70 million Catholic votes at stake and another 18 million Hispanic balloters in play, Wyncott needs a neutralizer fast.

Owen Feeney, the head of the U.S. Conference of Catholic Bishops, wishes he had time to mourn the death of his lifelong friend, James Ingram. But with new lawsuits piling up at his office every day, it’s a luxury he can’t afford. Neither is a potential $1 billion payout to sex-abuse victims and their families. When he receives a call from President Wyncott’s campaign, he sees a solution to both men’s problems.

Yet even as Feeney does what any good shepherd would do – protect his church– Peter Merrick's own investigation of James Ingram leads him to the Bishop's door. Before long, he stumbles on a trail of cover-ups that threaten both the election and justice for victims everywhere.

At this explosive intersection of greed and faith rests the calculation each of us makes about when to do the right thing and why.

Like John Le Carre's The Constant Gardener and Netflix's "House of Cards," The Shepherd's Calculus takes an unflinching look at democracy, idealism and the cost of where they meet in between.

Direct Orders for paperback from the Cavan Bridge Square Up. All direct orders come with an author signature!

Visit Amazon.com for your paperback or e-book copy.

Visit B&N.com for your paperback or e-book copy. 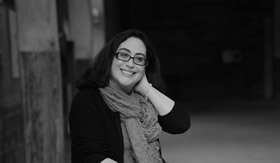 C.S. Farrelly was raised in Wyoming and Pennsylvania. A graduate of Fordham University (BA, English), her eclectic career has spanned a Manhattan investment bank, the NYC Department of Education and, most recently,the British Government’s Foreign and Commonwealth Office. She was a 2015 Presidential Leadership Scholar and obtained a master’s degree from Trinity College Dublin, where she was a George J. Mitchell scholar. Her master’s research on immigration in contemporary Ireland has appeared in domestic and international journals and she has occasionally freelanced for The Irish Echo newspaper.

A playwright and producer in her spare time, she served for nearly 10 years on the board of the Origin Theatre Company. Her one-act play, Exit or Transfer Here, was staged by the Looking Glass Theater and another work, ArklowBlue, was produced by Turtle Shell Productions. Her most recent play, Relief, received a staged reading as part of the annual 1st Irish Theatre Festival.

She has lived in New York City, Washington, D.C., Ireland, and England (where she did a study abroad program at Oxford University and held her favorite paid position: a part time job reading philosophy aloud to a retired professor from Brasenose College with macular degeneration). An avid hiker, she camped her way through East Africa, from Victoria Falls to Nairobi. She currently lives in Pennsylvania with her family.

The Shepherd’s Calculus is her first novel.

Got a question for me about my book or just about life in general? Just want to say hi?
Please feel free to contact me.